The Anatomy of SEO Scams

Ah, the unsolicited SEO email pitch: if you’re an ecommerce store owner, you’ve probably gotten at least a couple of these in your day. And if you haven’t, there’s a major likelihood that you’ll end up on a list at some point; scam SEO agencies use highly untargeted methods of mining for email addresses and shop domains. As an SEO strategist, I see these a lot, too, when clients forward me the attached message and say something like, “Should I pay any attention to this?” And that’s what makes these spammy emails so dangerous. They’re designed to bamboozle unsuspecting business owners into thinking that their site is an organic disaster, and the only way to fix it is by (of course) hiring the agency of the hour. Let’s take a look at one of these emails and break it down so you can learn to spot the red flags: 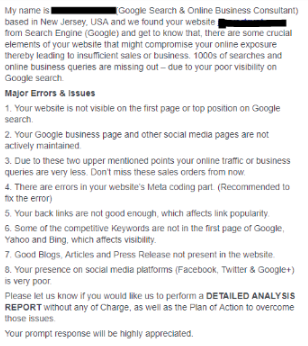 First things first, if you spot any grammar errors, be wary immediately. Typos happen, and not all of us have perfect grammar, but the syntax oddities that you’re reading in that first paragraph or in phrases like “Recommended to fix the error” move beyond the occasional grammar faux pas and into the realm of someone who’s used to the linguistic rules of an entirely different language. In other words, this isn’t a native English speaker.

Does that mean you should never trust an SEO strategist if their first language isn’t English? Goodness no! Being able to speak multiple languages is a huge asset in a field where you at least have to be able to speak English and code. But a large portion of SEO is content-related, and part of thriving in the very wide-reaching field of SEO is playing to your strengths. That means a writer is going to get her technical work double-checked by a technician, and a technician will get her content double-checked by a writer. A sales pitch that doesn’t display mastery of English is an example of a team that can’t play to its strengths.

Red Flag 2: A Lack of Specificity

If an email highlights ten points that could apply to any business out there, it means they’ve sent this same email to every business out there. You might be thinking, “But wait, my social media presence is poor! How would they know that if they didn’t look at my Facebook page?” Well, “poor” is relative — and they know that. With apologies to any Astrology fans out there, they’re using the Astrology method of closing a sale: making sure all feedback stays vague so that you’ll read into it exactly what you want to read into it.

If the missing information is on deep internal pages and you’re nailing it 90% of the time, that probably doesn’t matter.

Here’s where it gets confusing, though: sometimes they will give you specific numbers. They’ll tell you things like, “You’re missing 71 H1s” or “You have 172 missing/duplicate meta descriptions.” This is simply the vague disguised as specific; it means they ran your site through an automated tool that can pull those numbers instantly. This information isn’t helpful on its own because it’s completely void of context. Sure, you might have some missing meta data, but if the missing information is on deep internal pages and you’re nailing it 90% of the time, that probably doesn’t matter. SEO isn’t about finding everything that’s going wrong; it’s about putting that information into perspective and building a strategy. And that brings us to the next red flag.

Red Flag 3: A Focus on the Negative

If the email reads as if your website is on the verge of burning down, it’s probably a scam. Fear is a cheap sales tactic, and anything that makes you feel instant fear or alarm deserves some extra-critical scrutiny. This is true in life, too.

Red Flag 4: Any Mention of Page One

Unless your website is unindexed, I can guarantee that it’s on the first page of Google for something. We might have to spend some time copy-pasting sentences from your site directly, but I promise you, we’ll find something. Page one in and of itself is a meaningless metric, and yet spammy SEO emails lean hard on this mention because they know it’s likely that your knowledge of SEO doesn’t extend much further than, “Something something get to page one.”

What To Look for Instead

Does this mean that every unsolicited email you get about your SEO is a scam? While it most likely is, some good ones can slip through the cracks sometimes. Look for a positive tone and a genuine connection to your site (example: “I love your promise to donate one bar of soap for every bar you sell, and it would be an honor to work with a mission-driven business”). The positive tone will continue when discussing possible results, but it won’t promise anything; instead, it will focus on success the company has had with similar websites in the past.

Don’t expect anyone to put in a lot of free work up front.

And unless you’re an obviously high-revenue business and thus a huge possible account for the agency, don’t expect anyone to put in a lot of free work up front. We talked earlier about specifics, but the fact is, it’s not a good use of the agency’s time to get so specific up-front that they’re giving away work for free. They also won’t — this is key — pretend to be specific. A reputable agency won’t pretend to be anything, because they’ll be able to rely on their past results and your site’s awesome potential.

When in doubt, do your own research. If you think you need SEO help, then Google around for reputable SEO services and ask for a proposal. And if you’re not sure where to start, Volusion’s in-house team is pretty top-notch! Your time and money are valuable, so don’t sink either one into a scammy SEO agency.

How much did you enjoy this article?
Thank you for helping us improve our blog!
Subscribe to Our Blog
Related Topics SEO
About Meg Nanson

Meg Nanson is a Search Marketing Specialist with five years of experience in SEO, ranging from small local businesses and nonprofits to national corporations.

Get the scoop on 301 redirects…