How to Make #hashtags Work for Your Brand

If you don’t tend to use hashtags, scrolling through any social media feed #can #be #overwhelming. So many brands are utilizing hashtags to expand their reach, but figuring out when and how to properly wield that mighty # is sometimes unclear. What should you mention? Who should you mention? What in the world does #instagood mean? What other crazy hashtag jargon is floating around out there?? Not to worry: here are a few tips to help you make hashtags your new #bffs.

We all know what #hashtagslooklike, but if you’ve never used them, their function can be unclear. (And if you know how to use ‘em, great! Hop down to the next section.) On social media, hashtags act as a kind of filing system for certain topics. People tag their posts with hashtags, which sort content into designated “files.” These files include all posts with that particular hashtag. Some hashtags have millions of posts, while others…are a bit more specific.

So how can you make hashtags work for your brand? First, do some research. Figure out what’s trending in your niche, even if it means spending a half hour searching for various iterations of #mensfashion. Seriously: #mensfashion and #menstyle may be super similar terms, but as hashtags they both have separate-but-large traction. It may be painstaking, but come up with every word combination you can to describe your brand, see how the hashtags are doing on social and make a list of the ones that are sticking.

As a general rule of thumb, it's best to use niche-specific hashtags instead of broad-but-trendy ones (like the ever-popular #instagood). Ambiguous hashtags like #instagood may lead to a lot of likes, but most of them will probably be spam accounts. You want to drive more high quality, relevant likes and gain followers by using industry relevant tags.

Now that you have that list, it may be tempting to just slap all the hashtags on each post you make. Not so fast! While hashtags are great for brand visibility, they can also clutter up your posts. Additionally, you don’t want to look like you’re trying too hard. Here are tips for hashtag use on some of the bigger platforms out there.

Twitter: You’ve only got 140 characters, so make ‘em count. If you’ve got something great to say that doesn’t leave any room for hashtags, that’s fine! Don’t sacrifice good content for exposure tactics. When you are able to squeeze in a hashtag, keep it short and sweet. Find one or two that perform well and will get your point across without weighing down your tweet. Also, don’t be afraid to try and get clever, as JetBlue demonstrates well: 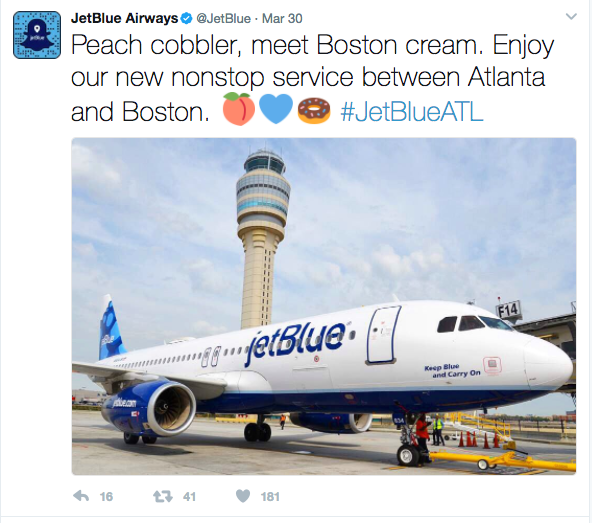 Instagram: With IG, you can add up to 30 hashtags per post. (If you add more than 30, your post will not show up in ANY of the tags.) If you want to add more hashtags (or not have any in the original caption), there's a way you can do so by commenting on your own photo. This also makes your photo look less spammy, which is why you might want to make it a best practice each time you post: 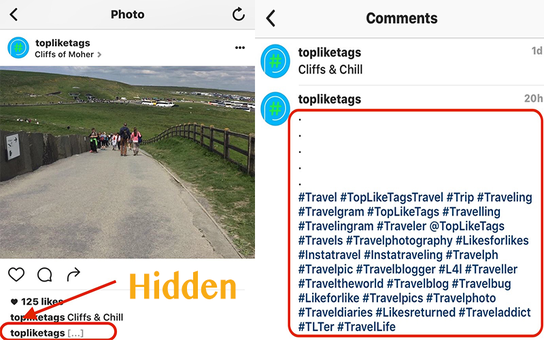 Additionally, it's really helpful to search for hashtags that might be relevant to your post, to figure out what terms will work best for you. Instagram's search feature is awesome for this kind of discovery. If you start typing a word in the hashtag you want to use, it will show most relevant hashtags with their popularity/volume count right on the side. You can also use free tools like Hashtagify to find tags related to your post and how popular they are as well!

Facebook: FB isn’t exactly a big player in the hashtag game, but that doesn’t mean you can’t use it to your advantage. While it doesn’t have the character limit of Twitter, there’s also no clever way to hide your tags, like on IG. Keep Facebook hashtags thoughtful, relevant and somewhat brief. 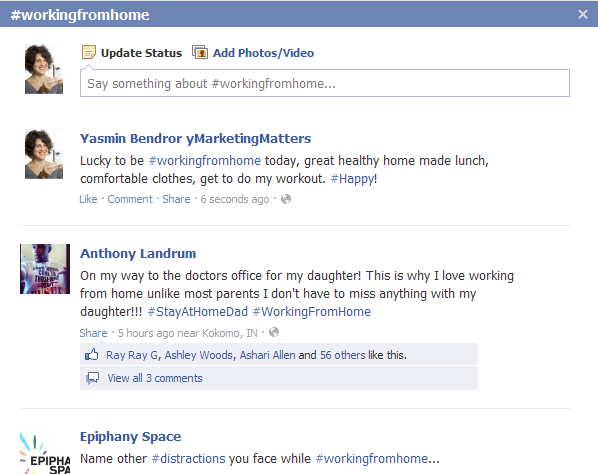 If you’re really feeling adventurous, you can create your own hashtag campaign for your brand. This works great if you’re running a contest, or if you want people to interact more with your social channel. For example, #TacoBellWedding isn’t exactly a numbers-driving phrase, but the chain has made it into a fun social tag where people who have had Taco Bell at their wedding can submit photos. (And make everyone else jealous.)

It comes down to common sense.

There are no set hashtags you have to use on any given post, and there’s certainly no rulebook for the Dos and Don’ts of hashtag usage. If you’re feeling uncertain, just stick with good ol’ common sense. What are the first few words that come to mind when you look at the post you’re about to make? Chances are, they’re the same words that first come to mind for everyone else looking up that topic. Stay on brand and stay savvy, but don’t lose valuable time debating on whether or not to put #sunflowers on that pretty sunflower photo you just posted. Just do it! Play around with when and how you use hashtags, and pretty soon you’ll be a #pro.

Do you have any tips for using hashtags? Let us know in the comments!

How much did you enjoy this article?
Thank you for helping us improve our blog!
Subscribe to Our Blog
Related Topics Social Media
About Andrea Kinnison

Andrea is a writer, photographer and Marketing Manager in Austin, Texas. She enjoys going hiking and eating sushi, but not doing both at once.

The world of pinning has grown tremendously since Pinterest’s launch in 2010. A pin is no longer just a wrestling move – it’s become the cor…

Infographic: 139 Facts About Instagram to be Aware of in 2017

Instagram is a highly visual social media platform currently boasting over 400 million active users. With a potential audience like that man…