Social media has become an integral part of our lives—from sharing selfies to posting cool videos and Instagramming our every move. But social media for ecommerce is quite different. With organic reach constantly decreasing, it takes more than just a funny meme to get attention. It all comes down to creating engaging content and serving it to your target audience in the best way possible. Which is why we're here to tell you the best times to post your content.

There’s a formula to creating successful social media content, and a big part of it is when to post on each channel. First, you obviously want to post when your audience is most active, but how do you figure that out? Good thing we’ve called upon the data gods to help us. All it took was a bit of research and Googling!

The best time to post on social media differs depending on a few variables:

Each network has a very unique use for marketers and consumers, so it only makes sense that the best timing of posts would be quite different. Let’s break it down by network. While CoSchedule and Hubspot did a great job compiling the data, we do want to remind you that it’s always best to use each network’s analytics to get the most accurate information for your business.

Facebook is so incredibly intertwined in our lives that we use it pretty much all day, every day. But that doesn’t mean it’s okay to post whenever you want as a business. Instead, it’s best to post when your audience is most active. The easiest way to find this information is to check out your Facebook Insights. Insights is Facebook’s analytics system and it’s free for all business pages. It will show you a graph of when most of your page fans are online, meaning you have the best chance of reaching them by posting at that time.

This timeline will differ depending on industry and audience, but generally, the best times to post on Facebook are Wednesday – Sunday between 12 p.m. and 4 p.m. The days with the best engagement are typically Thursday – Sunday. 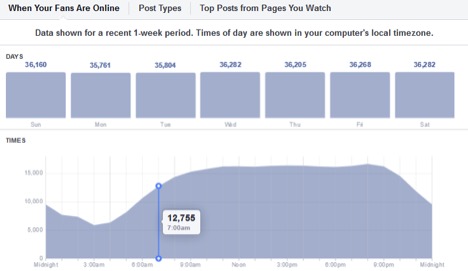 For me personally, Twitter is something I scroll through before bed or while I’m waiting on line at Chipotle to score a delicious burrito during lunchtime. Like most people, I usually use Twitter during my down time. That being said, Hubspot’s data shows that the best times to post on Twitter hover around lunchtime between 12 p.m. and 3 p.m. during the week. Wednesdays also seem to have a later peak activity time as most Twitter users seem to be tweeting during rush hour from 5 p.m. – 6 p.m.

While Twitter doesn’t give you the ability to check when your followers are online, you should be able to do a little A/B testing to find out when your tweets perform the best. Dig into Twitter analytics to check how many impressions and engagement your tweets receive at different times!

Instagram is unlike any other social network because it’s almost exclusively used on mobile devices. Because most people are attached to their smartphones, Instagram is widely used at all times of day. For marketers and business owners, posting on Mondays and Thursday should increase the engagement. However, people will typically like posts on Instagram during the day, but they won’t fully engage or comment until the evening hours. Probably to ensure they don’t get in trouble at work ;)

That being said, again, try testing it out to see what works best for your followers and target audience. Though Instagram has no native analytics tool, the network recently said that they would be launching one soon so brands can get to know their followers more precisely! Hallelujah. 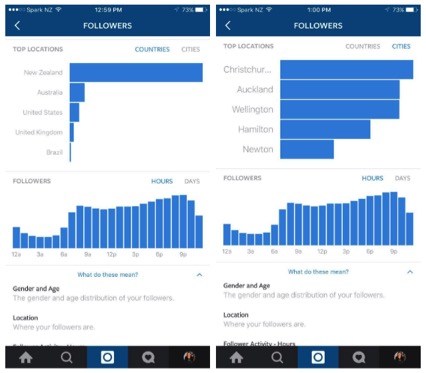 Like Twitter, I’ll occasionally browse Pinterest when I just get home from work and flop down on my couch. Who doesn’t want to peruse through hundreds of awesome wedding dress styles while relaxing after work?

According to Hubspot’s research, this network is most popular in the evening hours on pretty much every day. Peak hours to post include 8 p.m. – 11 p.m. However, there is a burst of high traffic use from 2 p.m. – 4 p.m. during the week as well.

Think of LinkedIn as that distant uncle you only occasionally talk to at holiday parties. The conversation is still pretty formal and straight to the point. For B2B business owners and marketers, it’s important to think of this when deciding which days to post to this network. Because the conversations on LinkedIn are a bit more formal than say, Facebook, it’s a good idea to use this information when determining which times to post. Obviously, LinkedIn is most heavily used during the week when people are at work.

Needless to say, the best times to post fall during the week between work hours. Like Twitter, business owners and professionals browse LinkedIn before work, during lunch and after work. However, the best time to post on LinkedIn is typically midweek. Posting on Tuesday, Wednesday or Thursday at 7:30 a.m. – 8:30 a.m., 12 p.m. and 5 p.m. – 6 p.m. provides the best chance of garnering engagement and impressions.

Now that you know what time you should be posting on each of these social channels, get started writing some awesome content. Don’t be afraid to have fun and get creative! If you create content with that in mind, it’s only a matter of time before you go viral!

Have any questions about posting on social media? Let us know in the comments!

How much did you enjoy this article?
Thank you for helping us improve our blog!
Subscribe to Our Blog
Related Topics Social Media
About Samantha Rupert

Samantha is a Marketing Manager at Volusion and has over seven years of experience in creating successful omnichannel marketing campaigns for small and large brands.

Infographic: 115 Facts You Need to Know About Social Media

Social media presence is a key factor when it comes to the success of a brand. Your company will never really gain traction unless you know…

5 Ways Brands Can Recover from a Social Media PR Nightmare

Social media is an excellent tool for managing your brand voice and engaging with your audience. However, when not managed closely, a seemin…